A downloadable game for Windows

*unless you have the MORE OPTIONS DLC!!! (PS: the DLC is included in the )

If you have game or payment issues, check the TROUBLESHOOTING page first!

In order to download this game you must purchase it at or above the minimum price of 2.00€ EUR. You will get access to the following files:

An explode on impact setting for the dynamite would be nice.

Hello. I changed the resolution to 300x200 and now I can't  change it back as I can't get to the options button as it's off the screen. Is there a way to reset the game? I tried uninstalling but it still remembers the resolution! Thanks.

Help, i can't load towers in game all i can do is throw block (and i sended an email but no responds

i need help i bought this to destroy building and i all i got was the files and i don't know how to actuality play. plz i want to destroy some buildings

The recommended way to play the game is via the itch app. It will also automatically update to the latest version.

Hi, I'm not sure I received your email. Can you resend it (to nothke@gmail.com)

How do i load vox file

See here: https://nothke.itch.io/tower/devlog/102700/the-file-update-and-magicavoxel
You need to export the file as POINT file and put it in <GamePath>/MagicaVoxel/

How do you play? I downloaded the zip file but cant get anything to run?

Hi, i still would really want to purchase this game but i have no way of paying through paypal. Is there any other methods?

Can you send me a mail on nothke@gmail.com?

Hello, In the game i cant build any tower

I load a tower and nothing happen... The only thing i can do is throw cubes

me too i can't seem to load a tower

Hel[ still havent got the game is this a scam?

Hey, sorry, I missed the message. There are problems with paypal sometimes, send me a mail at nothke@gmail.com and I'll send you the key. Sorry about that.

Can someone please help me i bought this a day ago and still havnt got my gam.

Help, Ijust bought the game but i cant find the download in my email.

Hello ! the game worked but I can't have tower. I can throw red cube, move, or change the wind. However I have no tower, and i can't create one. What can I do for that ?

Hi, can you open and build any other towers when clicking on "Load Tower"?

I tried all the different towers by clicking on "load tower" and then "load", but nothing appear

Amazing game. Is there a way to stop the time and take a screenshot of the tower without the letters in the middle?

This looks like an amazing game but I do not have paypal. Is there any other way to pay?

If you paid and didn't get a link, send me a mail.

where do i find the file to download the game

I've sent you a mail

any place to view creations done by other people?

Game wont Launch, dont know why used itch to download and i get a unity loading window then imedatly crashes, help I want to play

Can you try the game again with the new update? The compiler update should have fixed that.

Ok two months later, I have updated to a $4k windows pc, just so i can play this. haha cheers nothke

here is some constructive feedback :)

1) it would be nice to be able to rebind controls for non-qwerty users (and everyone else). It's hard to use wasd instead of zqsd for most people and I can't type the squiggly line on my keyboard.

2) if this isn't already in the DLC, maybe an option for daytime?you can just add it to the dlc too, it would be a nice feature to show people that this isn't just a unity physics engine but more like a "game" that can be a lot of fun!.

3) extend the time speed option to 10. this is just something I kinda want when trying huge structures because of my crappy pc. I know that this would decrease the accuracy but being able to do it would

please tell me if any of these things are already in the DLC.

I would love to see the game get a bit more customisable in the future, but it's still a really fun(ny) game though!

one final question: are you still working on the game or is this the final version? (other than some bugfixes maybe)

Alt+Shift is what you want for 1). Changes your keyboard to qwerty/azerty and just using it again changes it again.

nope, that changes keyboard language. you can download language packs in your settings

hmmm. I can start the game but as soon as i click, one of the red cubes shows up, but there is no physics to anything. Dynamite goes off, but has no effect even at max power, anybody know a fix? do i need to download more files around her

EDIT: I fixed it by going back to some previous drivers.

That is really strange. what kind of drivers did you revert?

i cant play it, i downloaded it in itch and click launch but it says tower.exe has error and fails

It's possible the game is not compatible with your PC. The app requires a 64bit system. What are your specs?

64bit,i believe.when i load it the unity icon appears with a red box with a ! inside on the top left corner.

The log file should be in C:\Users\username\AppData\LocalLow\Nothke\Tower\Player.log, if it exists can you please send it to nothke@gmail.com?

Should be in your inbox now, thanks

how did u use havok physics in unity?

these physics are from unity

There is a new Havok physics package that uses the new DOTS tech. You can learn a bit about it here.

I am aware some people have issues. Can you please send a mail to support@itch.io with your account and game page. If they are unsuccessful at solving the problem contact me via mail: nothke@gmail.com

Paid but never got OwO

Hi, that could be an issue with Itch. Send me a mail to nothke@gmail.com

thanks I figured It out it's laggy but still fun

Either unpack or alternatively you can use the itch app, it will help you handle downloading and playing.

I have been looking for this type of game for a while, absolutely love it, great work! I love the code aspect of the game too but I think you should keep the sliders in some form or another as it would keep the game accessible to more people. Especially as I expect this to blow up (pun intended) as I happened upon this through a fairly big youtuber, Drae. Definitely recommend it, again fantastic work!

First it was awesome. Now its super-awesome. Keep it up, great work, lots of fun

The code update is great, especially the ability to add colors. Dont remove the sliders tho, they are really user-friendly. I have played this game with kids, and they loved testing out all the sliders. Dont remove them, hiding the GUI is totally enough. You could also add a slider for lighting, like color temperature and position of the sun. Another great feature would be a slider for tower corners. Making triagonal and hexagonal towers without coding, just with a slider, would be lots of fun for kids. Keep it up, this is a great game since the first version came out.

Thanks a lot for the feedback! It made me happy hearing that the kids enjoyed it!

Yeah, I understand that sliders are really cool. I am going to look into an ability to automatically add sliders for designated parameters. So when you execute the code, the parameters get detected and turned into sliders. So you get the slider fun from any code :)

For the wind, yes, I didn't really spend much time tweaking the min-max values :( I think that the value might actually need to be exponential, as it's too sensitive to little wind, but it's actually kinda fun with very strong winds too.

Great updates! This gets more fun :)

what a fun little sandbox it is. Would love to see Towers that are filled up with bricks (like a pillar)^^

This is a lot of fun to screw around with. I'd love to see an Earthquake button that just shakes the tower a bit.

And what is "speed of sound" do? Does the game have sound? (Not for me ATM.)

No, there's no sound yet, "speed of sound" currently just affects the speed of shockwave of the explosions.

I want to add sound at some point. Experimenting with procedural sound at the moment.

Great to hear. That would be the icing on the cake. :)

Wind is broken? It blows forever with same strength even if set to zero.

I love this game by the way. Really, a lot of fun.

I'd love more shapes though.

Strange, setting gain to 0 of both wind types should eliminate the wind. I'll test that

Maybe I am missing, but no quit button? And alt-f4 broken. Have to kill the process in Task Manager.

Hmmm, alt-F4 should work. It-works-on-my-machine™. I'll add a proper quit option for the next update.

An itch.io exclusive until Epic throws monies at you. Lol! If not, they'll get you for the next game "Throw triangles into triangular miniatures to enlarge them".

Good and minimalistic, i like it very much. Some ideas: Adding a button to delete all the red cubes, set velocity at which the red cubes are thrown and maybe press and hold a button to fly faster

All coming in the update this evening :) Btw, you can already change flying speed by scrolling.

Space/ctrl to raise and lower the camera would also be welcome!

Those are strange keys for up/down :D What inspires you? 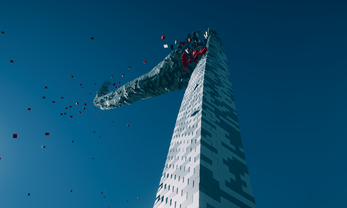